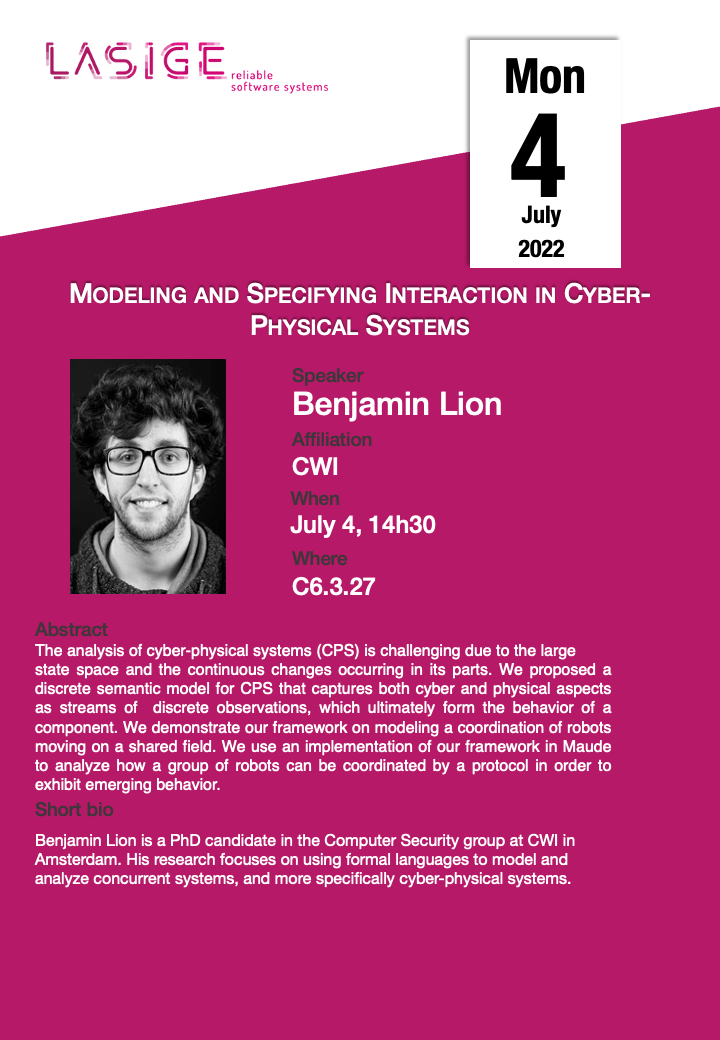 Abstract: The analysis of cyber-physical systems (CPS) is challenging due to the large state space and the continuous changes occurring in its parts. Design practices favor modularity to help reducing the complexity. In [1], we proposed a discrete semantic model for CPS that captures both cyber and physical aspects as streams of discrete observations, which ultimately form the behavior of a component. This semantic model is denotational and compositional, where each composition operator algebraically models the interaction between a pair of components. In recent work, we proposed a specification of components as rewrite systems. The specification is operational and executable, and we study conditions for its semantics as components to be compositional. We demonstrate our framework on modeling a coordination of robots moving on a shared field. We use an implementation of our framework in Maude to analyze how a group of robots can be coordinated by a protocol in order to exhibit emerging behavior.

[1]: https://arxiv.org/pdf/2106.15661v2.pdf
Bio:Benjamin Lion is a PhD candidate in the Computer Security group at CWI in Amsterdam [1]. His research focuses on using formal languages to model and analyze concurrent systems, and more specifically cyber-physical systems. For his Ph.D., he developed an algebraic semantic model for cyber-physical systems, and an operational specification in a rewriting framework. Concurrently, he contributed to the development of a compiler [2] for the Reo coordination language, and implemented a framework [3] in Maude to simulate and analyze concurrent systems.