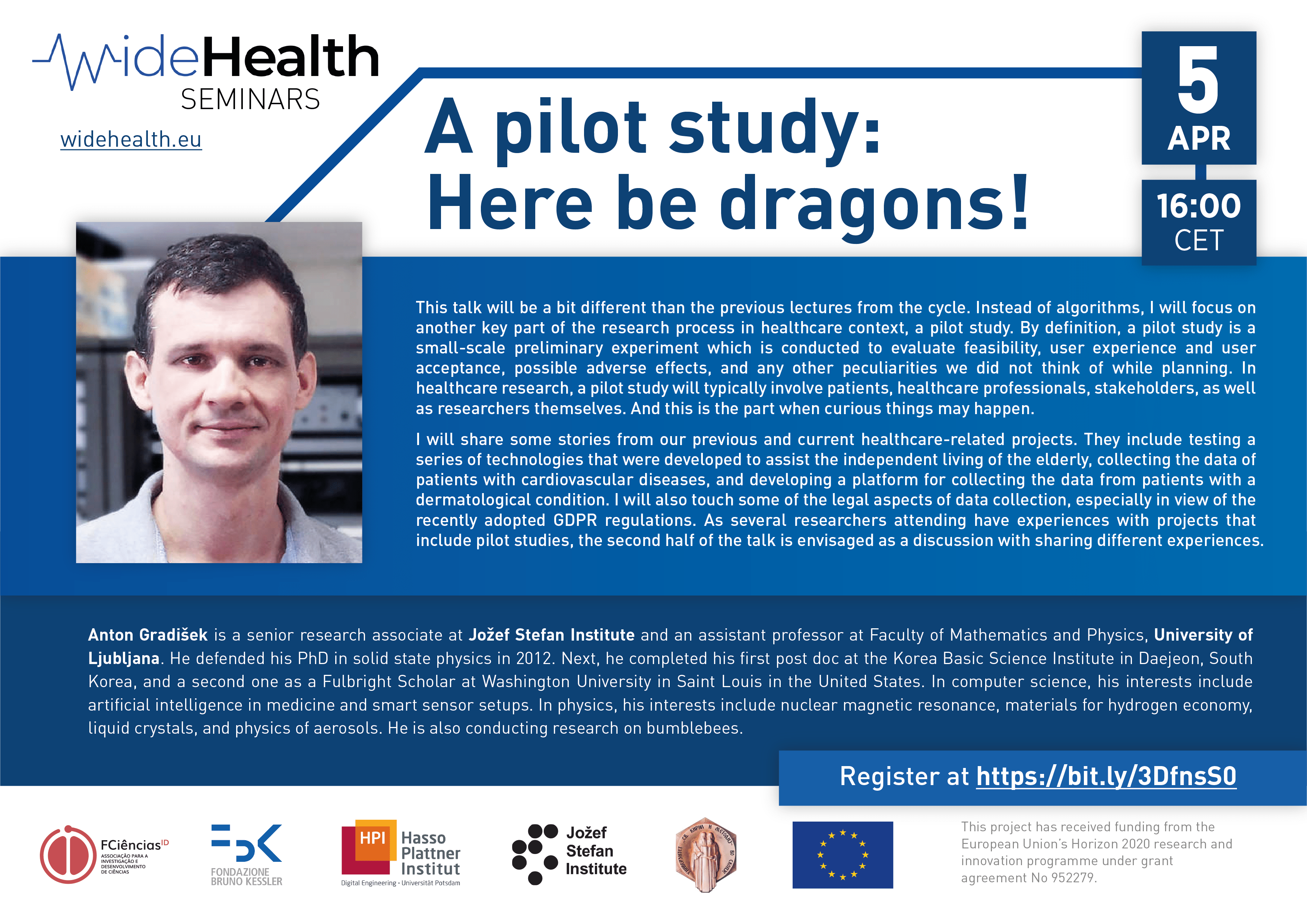 The EU-funded WideHealth project aims to conduct research on pervasive eHealth and establish a sustainable network of research and dissemination across Europe.

Title: A pilot study: Here be dragons!
Speaker: Anton Gradišek
When: April 5, 2022 – 16:00 CET (3PM in Portugal)
Where: zoom link shared before the session to those who register
Registration link: https://bit.ly/3DfnsS0

Abstract: This talk will be a bit different than the previous lectures from the cycle. Instead of algorithms, I will focus on another key part of the research process in healthcare context, a pilot study. By definition, a pilot study is a small-scale preliminary experiment which is conducted to evaluate feasibility, user experience and user acceptance, possible adverse effects, and any other peculiarities we did not think of while planning. In healthcare research, a pilot study will typically involve patients, healthcare professionals, stakeholders, as well as researchers themselves. And this is the part when curious things may happen.
I will share some stories from our previous and current healthcare-related projects. They include testing a series of technologies that were developed to assist the independent living of the elderly, collecting the data of patients with cardiovascular diseases, and developing a platform for collecting the data from patients with a dermatological condition. I will also touch some of the legal aspects of data collection, especially in view of the recently adopted GDPR regulations. As several researchers attending have experiences with projects that include pilot studies, the second half of the talk is envisaged as a discussion with sharing different experiences.

Short bio: Anton Gradišek is a senior research associate at Jožef Stefan Institute and an assistant professor at Faculty of Mathematics and Physics, University of Ljubljana. He defended his PhD in solid state physics in 2012. Next, he completed his first post doc at the Korea Basic Science Institute in Daejeon, South Korea, and a second one as a Fulbright Scholar at Washington University in Saint Louis in the United States. In computer science, his interests include artificial intelligence in medicine and smart sensor setups. In physics, his interests include nuclear magnetic resonance, materials for hydrogen economy, liquid crystals, and physics of aerosols. He is also conducting research on bumblebees.