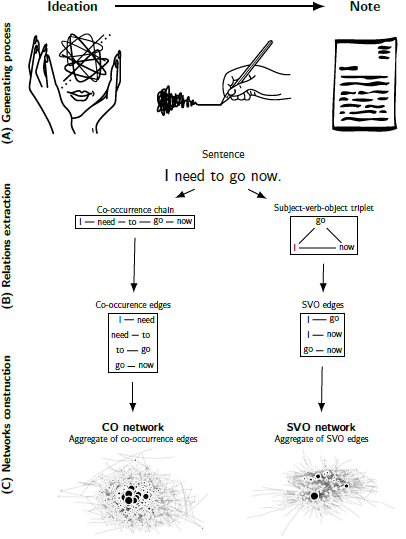 The paper “Revealing semantic and emotional structure of suicide notes with cognitive network science”, co-authored by the LASIGE´s integrated member Sofia Teixeira and other researchers (Szymon Talaga, Trevor James Swanson, Massimo Stella), has been published in the Nature Scientific Reports, a top-ranked journal.

This work has reconstructed for the first time the psychology expressed in suicide notes via data science, taking into account the perceptions and emotions as expressed by 139 people in their latest letters, written before taking their own lives.

It used Artificial Intelligence (AI) techniques such as cognitive networks and natural language processing to reconstruct the mental lexicon of the suicide letters and has identified a tendency of letters to reduce conflicting associations, describing key players such as loved ones or past deeds but in a sad and devoid of positive emotion light. These results were interpreted in light of current clinical psychological research and were obtained without human intervention, i.e. without anyone reading the texts. Distorted perceptions were also highlighted, with an anomalous projection into the future.

Sofia Teixeira says “Using theories from social sciences and psychology in cognitive networks, we were able to observe that in these letters there is a high degree of compartmentalization of positive concepts, evoking a sense of high emotional balance that is not present in other types of word associations. This is indicative of a psychological strategy for coping with the distress associated with suicidal ideation. Moreover, writing a suicide note may represent a way of re-establishing a sense of meaningfulness right before committing suicide”.

These results, obtained as numbers from the AI, are a symptom that those who choose to commit suicide perceive reality in a different way than usual. These methods are scalable and can extract clinically valid information from thousands upon thousands of documents in seconds. The authors hope that this approach can support clinical psychologists in a future where artificial intelligence and the human expert can work together to save lives.