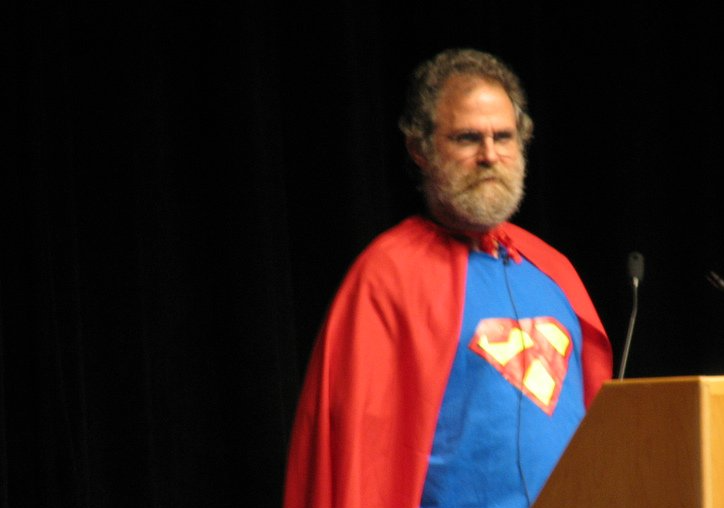 LASIGE invites Philip Wadler to present next Thursday’s cialis 10mg “Informática @ Ciências” seminar on “Propositions as Sessions”. Besides taking on his lambda-calculus super-hero alter-ego during his very entertaining talks, Philip Wadler is one of most influential researchers on the topic of programming language theory. Recently, he became involved with IOHK, a startup that develops smart-contract technology for blockchains.

Continuing a line of work by Abramsky (1994), by Bellin and Scott (1994), and by Caires and Pfenning (2010), among others, this paper presents CP, a calculus in which propositions of classical linear logic correspond to session types. Continuing a line of work by Honda (1993), by Honda, Kubo, and Vasconcelos (1998), and by Gay and Vasconcelos (2010), among others, this paper presents GV, a linear functional language with session types, and presents a translation from GV into CP. The translation formalises for the first time a connection between a standard presentation of session types and linear logic, and shows how a modification to the standard presentation yield a language free from deadlock, where deadlock freedom follows from the correspondence to linear logic.

Philip Wadler is Professor of Theoretical Computer Science at the University of Edinburgh and Senior Research Fellow at IOHK. He is an ACM Fellow, a Fellow of the Royal Society of Edinburgh, and editor-in-chief of Proceedings of the ACM for Programming Languages. He is past chair of ACM SIGPLAN, past holder of a Royal Society-Wolfson Research Merit Fellowship, winner of the SIGPLAN Distinguished Service Award, and a winner of the POPL Most Influential Paper Award. Previously, he worked or studied at Stanford, Xerox Parc, CMU, Oxford, Chalmers, Glasgow, Bell Labs, and Avaya Labs, and visited as a guest professor in Copenhagen, Sydney, and Paris. He has an h-index of 66 with more than 22,000 citations to his work, according to Google Scholar. He contributed to the designs of Haskell, Java, and XQuery, and is a co-author of Introduction to Functional Programming (Prentice Hall, 1988), XQuery from the Experts (Addison Wesley, 2004) and Generics and Collections in Java (O’Reilly, 2006). He has delivered invited talks in locations ranging from Aizu to Zurich.