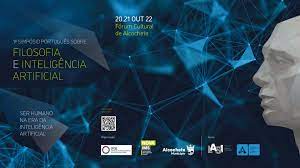 The talk versed about “AI – Technology” and our researcher also participated at a round table debating “AI & Philosophy of knowledge”, with João Cordovil, Robert Clowes, and Goreti Marreiros and moderated by Klaus Gartner, about questions such as, among so many others, “What is consciousness?” “What is thought?” “How to think about the ethical limits of AI?”.

AI researchers are often confronted with multiple ethical, legal, sociological, and philosophical questions that typically go beyond the boundaries of Computer Science expertise. Problems that Philosophy has always struggled with, developing analysis strategies that can be of great use to Computer Science. It was also promoted a reflection on the impact of AI itself in its application to scientific activity.

This symposium is organized by the Alcochete Municipality, with the scientific coordination of NOVA IMS and the Center for the Philosophy of Sciences of the University of Lisbon (CFCUL) and the support of the Portuguese Association for Artificial Intelligence (APPIA) and the Intelligent Systems Associate Laboratoy ( LASI), that intends, in an initial and exploratory way, to address the impact of Artificial Intelligence on society and to contribute to the emergence of synergies between the various areas of the scientific community around this new theme in Portugal.