“A História do Pi em hipervídeo” launched on the web, Teresa Chambel tells the story in interviews for Ciências.ULisboa and Antena 1 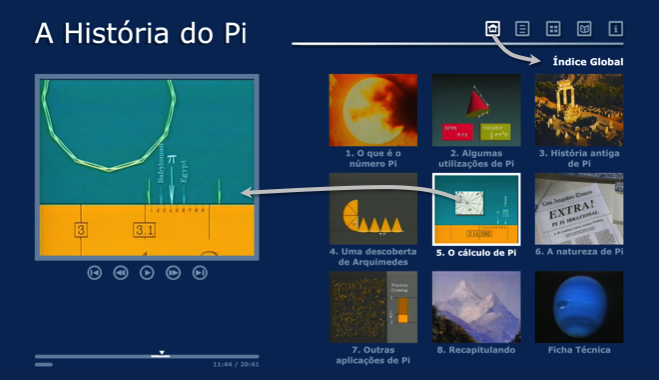 Video is a medium that has become increasingly ubiquitous in our lives, thanks to technology. It has proven to be one of the richest and most appropriate ways of presenting ideas, principles or problems through real images and situations, being an excellent way to communicate mathematical concepts and to show that Mathematics can be fun and intellectually rewarding. And even though the assimilation of the large amount and diversity of information transmitted in a short time in a video can be quite challenging, it can be stimulated and supported by hypervideo.

“A História do Pi em hipervídeo” was designed and developed to introduce structure and allow the interactive navigation of the video “A História do PI”, by Tom Apostol, integrated with other media, such as texts, images, audio and animations. The video was made interactive and complemented with more detailed information in the form of a digital book, where the different themes – definition of the Pi number, its mathematical nature and applications presented in their historical context – are in turn illustrated in context by the video.

The hypervideo was developed in the context of the “Matemática em Acção” project, from Centro de Matemática e Aplicações Fundamentais of ULisboa in collaboration with “Project Mathematics” from the California Institute of Technology (Caltech) and LASIGE. It was initially published on CD-ROM with the support of Texto Editores, having been distributed to secondary schools, and has recently been adapted to be made available on a wider scope on the web, on the occasion of the first International Day of Mathematics, on March 14th. This date, already celebrated in many countries as Pi Day, was chosen by UNESCO for this International Day, due to the similarity with the first digits of Pi: 3.14. “Mathematics is Everywhere” was the theme of this first celebration, when the hypervideo about Pi was made available on the web, to become accessible “Everywhere”.

This story was told and explained in an interview for Ciências ULisboa, and on another one for the radio program “Dias do Futuro” at Antena 1.

Updated on July 13,2020, to include info about the Atena 1 radio interview.