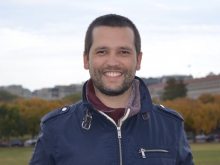 Abstract: Independent navigation is very challenging for blind people often due to a lack of confidence and knowledge about the environment, particularly in unfamiliar or complex locations. In this talk, I will describe some of the technological solutions we developed (and evaluated) at the Carnegie Mellon University in order to support blind users in navigating unknown locations by themselves. In particular, I will talk about a highly accurate smartphone-based indoor navigation system called NavCog3; a virtual navigation system allowing blind users to explore unknown locations before physically visiting the environment; and Cabot, a navigation robot that guides blind users to a destination while avoiding obstacles on their path.

Bio: João Guerreiro, LASIGE integrated member, is an Assistant Professor at Faculdade de Ciências, Universidade de Lisboa. Previously, he was a Postdoctoral researcher at INESC-ID and at Carnegie Mellon University. He received his PhD with distinction and honour in Information Systems and Computer Engineering from Instituto Superior Técnico, Universidade de Lisboa. His research, in the fields of Human-Computer Interaction and Accessible Computing, aims to improve blind people’s access to the physical and digital worlds using novel non-visual interaction techniques and systems. João Guerreiro publishes his research regularly at the premiere venues in Human-Computer Interaction and Accessible Computing (e.g., ACM CHI and ACM ASSETS).