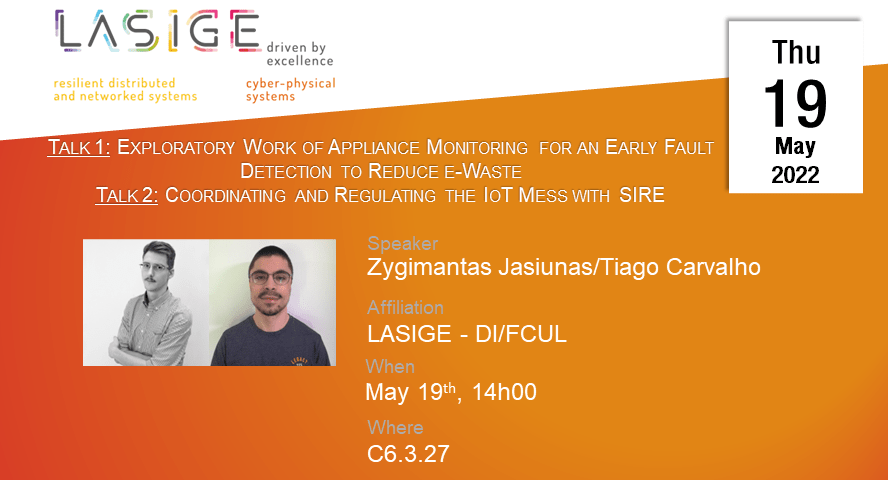 Abstract: As the global economy grows with a rapid pace, global sales and consumption of appliances grows in parallel. Based on consumer reports, millions of appliances are sold each year and these numbers keep growing as year passes. Majority of large-scale appliances consist of refrigeration, laundry, air-conditioners and other kitchen appliances. As a side-effect, tons of e-waste are produced each year of appliances that are no longer useful, functioning or performant as they used to. Large household appliances such as electric stoves, fridges and washing machines are making more than half of all collected e-waste. Unfortunately, the percentage of recycled e-waste is not satisfactory, only 40% of all e-waste is being recycled in European Union (EU). EU is keen on working towards recyclability, reusability and promoting prolonged appliance useful life. We are working on enhanced appliance monitoring using multiple sensors and exploring possible ways to identify early anomalies and faults of appliances, which would increase repairability and reduce e-waste by prolonging appliance life.

Short Bio: Zygimantas Jasiunas currently is a PhD student, developing his thesis in the area of machine learning and IoT. He is advised by Professors José Cecílio and Pedro M. Ferreira and his main interests are engineering monitoring solutions based on IoT-enabled hardware, machine learning and cloud computing.

Talk 2: Coordinating and Regulating the IoT Mess with SIRE

Abstract: As the interest in IoT grows, so does the need for well-rounded systems that can deal with various issues inherent to the area. However, the existent works on the subject focuses on solving one specific problem at a time. The main issue is that they are either lacking fundamental features or just aren’t specifically tailored for IoT. To solve this problem, we intend to develop a system with the main properties needed for an IoT system, such as coordination, authentication and intrusion tolerance. With the development of SIRE, we intend to make a system capable of performing extensible coordination and attestation, while being Byzantine fault-tolerant. Using this solution, we have a system that possesses all the main features necessary for IoT in a secure, efficient and fault-tolerant implementation.

Short Bio: Tiago Carvalho is a Master’s student in Computer Science, currently working on his thesis under the supervision of Professor Alysson Bessani and Professor António Casimiro. He attends to the VEDLIoT project, working with resilient distributed and networked systems.