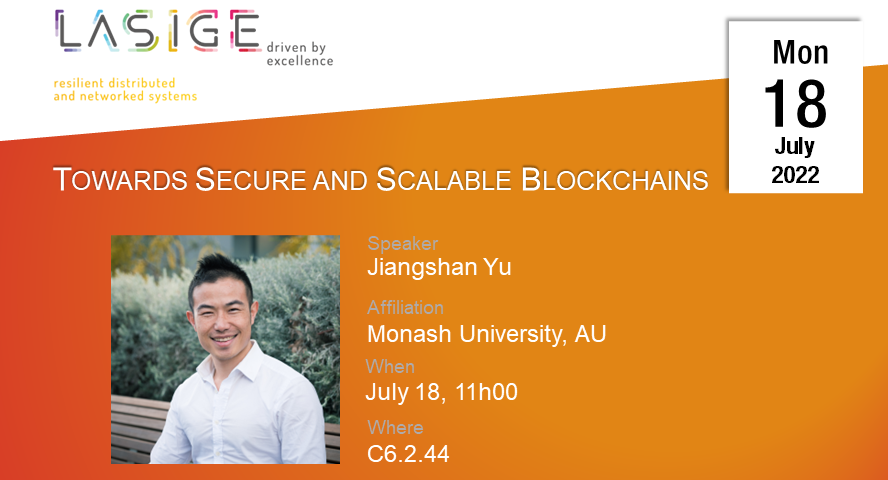 Title: Towards Secure and Scalable Blockchains

Abstract: Over the last decade, we have witnessed a rapid growth of blockchain technologies and their applications. Different governments have announced their strategy to boost the blockchain industry. For example, Chinese President Xi Jinping has recently endorsed blockchain and its potential for the Chinese economy; and the Australian Government announced that it would establish a National Blockchain Roadmap to help position Australia’s blockchain industry to become a global leader.
This talk presents an overview of three of our works towards secure and scalable blockchains. I will first revisit the honest majority assumption of permissionless blockchains (AsiaCCS’21), and then present our efforts in making blockchain more scalable and secure against real-world threats. In particular, existing proof-of-work based cryptocurrencies cannot tolerate attackers controlling more than 50% of computing power in the system at any time, but assume that such a condition happening is “unlikely”. However, recent facts and attacks render this assumption unrealistic. For example, there have been dozens of discovered 51% attacks in the last years, where a single attack stole up to 18 million US dollars. To address this issue, we propose RepuCoin (IEEE TC’19), the first system that is able to tolerate such 51% attacks, by using a novel incentive-compatible proof-of-reputation mechanism with reputation-based weighted voting consensus. This work has been reported by numerous news media globally, including ZDNet, Finder, and ScienceDaily.
In addition, we introduce Damysus (EuroSys’22), a streamlined BFT consensus leveraging trusted components. Damysus can tolerate a minority of faulty nodes and has shown its superiority compared to the performance of previous protocols, making it the most secure and scalable consensus algorithm to date. Damysus can be used either as a standalone consensus algorithm in a permissioned environment or to support RepuCoin in providing an even more resilient and scalable blockchain for the permissionless environment.

Bio: Dr. Jiangshan Yu is a 2021 ARC DECRA Fellow and Senior Lecturer (~US Associate Professor) at Monash University. He also serves as Associate Director (Research) at Monash Blockchain Technology Centre. He is a member of the Scientific Advisory Board for Austrian Blockchain Center (Austria), and an elected member of the IFIP 10.4 Working Group on Dependable Computing and Fault Tolerance. Jiangshan’s research interests are in the broad area of cybersecurity and applied cryptography, with a current focus on blockchain systems. The importance and impact of his research have been evidenced by several exclusive and competitive awards, including ARC DECRA (2021) and the IBM Academic Award (2020). The impact of his research includes identified critical vulnerabilities and recommended (and adopted) fixes in several deployed blockchains and their applications (with a total market cap of over $30 billion). His research is also of public interest, as illustrated by media attention, including hundreds of news media reports in over 7 languages across more than 10 countries. He has been a Principle Investigator of several projects worth over 360 million dollars.